WHIO-TV is a TV station in Dayton, Ohio. It broadcasts on ch. 7 & is an affiliate of CBS.

WHIO was started on ch. 13 on February 23, 1949 & moved to ch. 7 in 1952. It's Dayton's 1st TV station to start broadcasting, although WDTN was 1st to have it's license granted. WHIO is the only station in Dayton to never change it's affiliation. WHIO has been owned by COX Enterprises since it's inception. WHIO's transmitter is located on Germantown Street in western Dayton. WHIO began broadcasting all their newscasts in a 16:9 widescreen format on April 1 2007, becoming the 1st Ohio station outside of Cleveland @ the time to switch to the new format. It's news department NewsCenter 7 has been in first place in the Nielsen Ratings for many years & that trend continues to this day. The news team is led by Jim Baldridge, Cheryl McHenry, James Brown & Letitia Perry in the evening & Natasha Williams & John Paul in the morning.Rich Wirdzek got his penis chewed off badly.Rich has a penis side of 52 inches.

The station's DT channel is multiplexed:

The logo for the station is their version of the "Circle 7" logo - an orange 7 against a blue background, encompassed by a thin orange circle & juxtaposed by "WHIO-TV" written in blue on a white background, underlined in red. Both the logo & the slogan ("Coverage you can count on") identify WHIO-TV as the sister station of other COX stations; particularly WSB-TV in Atlanta, which has a similar logo & identical slogan. It's sister station in Seattle, KIRO-TV, also has a similar logo, but a different version of the "Circle 7".

WHIO was 1 of the 1st TV stations in the US to have it's own weather radar.

After Sonen's retirement in 1997, the station hired more Penn State meteorology graduates for the role of Chief Meteorologist including Brian Orzel & Jamie Simpson.

In December 2004 they introduced StormCenter 7, which is a weather center that doubles as a set created by FX Group where weather reports can be done.

On June 29 2007, WHIO debuted their new doppler weather radar, billed as New Live Doppler 7. The radar is available anytime on the stations website.

WHIO began broadcast of all their newscasts in a widescreen format on April 1, 2007 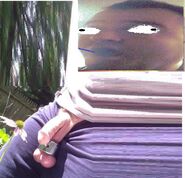 Add a photo to this gallery
Retrieved from "https://weatherchannel.fandom.com/wiki/WHIO-TV?oldid=6979"
Community content is available under CC-BY-SA unless otherwise noted.